What Does The Future Hold For Snap Shares?

On March 2nd 2017, Snap Inc. floated on the New York Stock Exchange (NYSE). That day, Snap shares closed at $24.48, which was 44% higher than its initial $17 IPO price and gave the company a market capitalisation of $33bn. A massive amount of shares were traded, which accounted for approximately 10% of total trading on the NYSE that day.

At the time, Wall Street analysts were apprehensive about Snap’s fundamentals, especially given the $515m loss it recorded the previous year. Consequently, a sell rating was given by most analysts, which contributed to a sharp drop as the stock price tumbled to $19.54 on March 17th.

Now that the hysteria surrounding the IPO has passed, it is worth reassessing Snap’s present situation and how Wall Street views the company’s prospects.

The Current Situation
About a month ago, Snap was on a downward trend, and it seems the puppy love all but disappeared. On May 10th, following a disappointing earnings report, Snap stock plunged 26% to $17.07, which was its lowest price since March 2017. The company reported sales growth of 286% that resulted in revenues of $149.6m, although analysts expected it to be around $158.6m. To make matters worse, Q1 2017 reported losses were $2.21bn, with IPO costs and stock-oriented compensation being the underlying factors.

Furthermore, Snap’s daily active users are up 36% to 166m, just under analysts’ expectations of 167-170m daily active users. This is bad news for the company since its direct competitors, Facebook and Instagram, now have Snapchat-like features on their own applications. Moreover, they enjoy a considerably higher number of users than Snapchat; Instagram and Facebook have approximately 400m and 1.284bn daily active users, respectively. Additionally, their user bases are growing at a faster rate than Snapchat’s.

Recent Rebound
However, May 14th, Snap’s stock price surged by around 8%. This was largely due to the release of SEC filings, which revealed that hedge funds, Third Point and Appaloosa, had acquired 2.25m and 100,000 Snap shares, respectively. Another hedge fund, Moore Capital, purchased 1.33m shares, according to filings that were published on Monday.

Nevertheless, there is a possibility that some of these positions were entered into a while ago, since most of the recently released information in the filings is 45 days old, which predates the disappointing earnings update. Furthermore, there is every possibility that the aforementioned hedge funds may have exited their positions by now.

As can be seen in the chart below, Snap shares are trading at $20.59 at the time of writing. It seems that hedge fund activity has blurred investors’ focus on the companies underlying fundamentals. 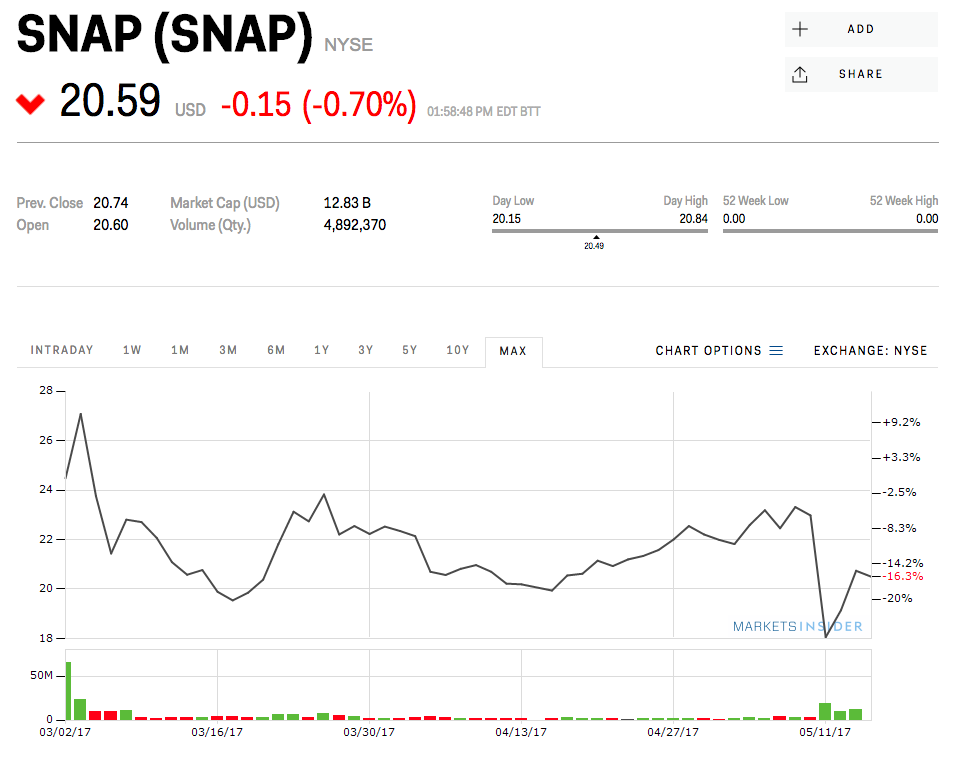 Reasonable or Ridiculous?
The question of whether it is reasonably for Snap to provide management and employees with huge stock-based compensation plans remains, such as the ones that were revealed in last week’s quarterly report.

Since the IPO, Snap has been everything but a stable company. Despite this, CEO Evan Spiegel was rewarded with stock-based compensation of around $750m, which amounted to 3% of the company’s shares. This way of compensating does not reflect Snap’s current performance, especially if the current stock price movements, losses and user numbers are considered.

The following is Snap’s Q1 2017 Consolidated Statements of Cash Flows.

The document shows that stock-based compensation rose from $5.538m in 2016 to $1.99bn in 2017, which is a tremendous increase. Usually, stock-based compensation is restricted to prevent directors from cashing out and aims to bind them to the company over the long term. However, in the case of Snap’s management, their stock can be sold to the open market at any time.

Future Outlook for Snap Shares
Broadly speaking, the main question is whether Snap will report better growth in daily active users in the near future, especially given the stiff competition it faces from Instagram and Facebook.

Furthermore, it is expected that the coming months will be rough for Snapchat. Lower than expected revenues, insane marketing expenses, tremendously high stock-based compensation plans without clear restrictions, and a reported quarterly loss of $2.21bn do not bode particularly well. Nevertheless, equity analysts are uncertain over what recommendations the stock deserves, as can be seen in the chart below. 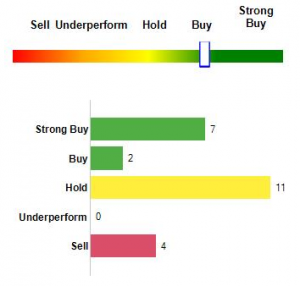 Most polled analysts give Snap a hold recommendation, while a large number also suggest the stock is a buy. Despite Snap’s poor performance and volatile stock price movements, analyst ratings are markedly better than they were at the time of the company’s March IPO.

In any case, whether or not Snap shares will gain momentum on the NYSE is still very much unknown.