Policy change
The current youth minimum wage differs substantially by age. Figure 1 shows that an 18-years old worker that earns a minimum wage makes only 45.5% of an adult minimum wage, which corresponds to €4.08 per hour compared to €8.96. This new minimum wage policy tries to reduce this gap. Workers aged 21 or 22 gradually face their minimum wage raise to the same level as the adult minimum wage. This transition should be fully completed by 2019. Secondly, workers in the age of 18, 19 or 20 will benefit as well from the new policy as to prevent employers from discriminating on age, which would be disadvantageous to older workers.

Note: percentages in figure relate to the adult minimum wage of €1551 a month (based on a working week of 40 hours). Changes are in percentage points and are relative to the status quo (January 2017). Data is retrieved from budget of the Ministry of Social Affairs and Employment (September 20th, 2016).

Figure 2: Productivity and wage by age 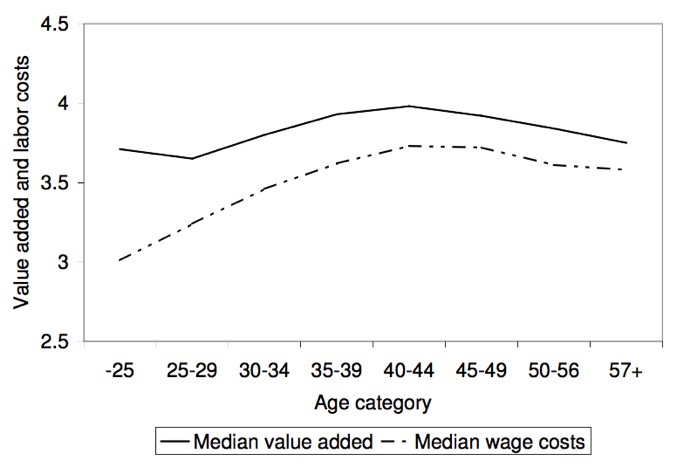 Source: Van Ours and Stoeldraijer (2010)

Furthermore, these findings are supported by the working force composition of grocery stores and restaurants. In the United States, about one third of workers in grocery stores is in the age category of 18 – 24 years. This is even more striking in fast-food restaurants where about 60% is aged younger than 25. These facts lead one to believe that the productivity – wage gap must be much more prevalent for younger workers. Thus, when looking at productivity, these workers simply deserve to earn considerably more.

“Even after the policy took full effect, minimum wages of workers aged 18 and 19 do not come close to their international counterparts.” 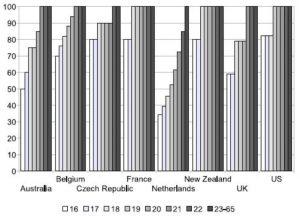 Source: Boeri and Van Ours (2013), The Economics of Imperfect Labour Markets.

Labour market effects
Economic theory suggests that an increase in youth minimum wages might come along with a reduction in labour demand for these groups. An increase in labour costs may induce firms to shift towards slightly older workers that did not face a wage increase. Although some studies actually found results opposing this theory [2], adverse effects will be counteracted by compensating employers for these increased labour costs. The government makes €100 million available on a yearly basis.

Max Pepels is a blogger at econooMax. Do you want to read more of Max? Visit the website of econooMax!