Irrationality in the supermarket

In economics, consumer behaviour is interpreted by means of the “homo economicus”. This concept portrays humans as purely rational and self-interested in their own benefit. However, this does not correspond to the numerous studies into irrational human behaviour. It seems that people would rather avoid equal losses than have equal gains (loss aversion), and we attach relatively more importance to something when it is already in our possession (endowment effect). Behavioural economics, which is a combination of economics and psychology, relates this bounded rationality to economics and is playing an increasing role in contemporary economic science.

‘’However, it may be the case that this economy pack turns out the be a ‘loss’ pack.’’

The economy packages of Albert Heijn show such a deviation from the “homo economicus”. These packages bundle products and are sold at a lower price, i.e. a lower price per kilo or per litre. However, it may be the case that this economy pack turns out the be a ‘loss’ pack. Take for example the apple juice packs of Appelsientje. When buying a single pack you pay € 1.17 a litre, while a litre in the economy package is 2 eurocents more expensive. It also appears that other products are (or have been) subject to this phenomenon, e.g. wipes of Zwitsel or Lipton Ice Tea. Despite the financial loss to the consumer, these ‘loss’ packs are being sold. It clearly demonstrates that the consumer is not fully rational. 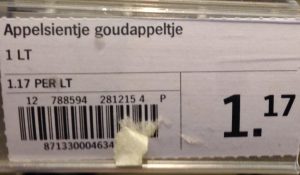 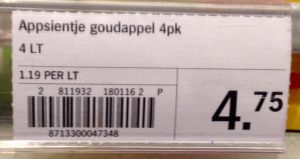 There is actually a flip side of the coin: the supermarket also exploits the consumer by using these misleading economy packs. As about 40% to 60% of total spending is defined as impulsive buying, supermarkets try in many other ways to encourage consumers to irrational purchases. Placing the fruit and vegetable department at the beginning of the store has several effects: the supermarket shows that it has fresh products available, the bright colours of the fruit provide consumers a good feeling, and after buying healthy products consumers will feel less guilty when buying unhealthy products. Furthermore, research has shown that people who enter a grocery store from the right (and counter clockwise walk through the store) spend on average about $2 more. Most people are right-handed and will therefore be more inclined to buy. Finally, the placement of the product is of great importance. Shelves at eye level, and at the beginning of an aisle draw great attention. Supermarkets place regular products in the middle of the aisle so that consumers have to walk past other less well-known products.

Buying loss packages is a striking example of irrational consumer behaviour. By purchasing multiple similar products, the consumer expects to be saving money, but in some cases the opposite is true. Due to the many indirect ways in which supermarkets try to influence consumers, it seems almost impossible to limit oneself to simply rational purchases in supermarkets. Supermarkets have become centres of irrationality. Be aware of these indirect and misleading ways that may influence you as this awareness will keep you from buying ‘loss’ packs.

Max Pepels is a blogger at econooMax. Do you want to read more of Max? Visit the website of econooMax!