Financial freedom is something we all dream of, but only a few achieve. The 4% rule is a fairly well-known way of calculating how much money is needed in order to no longer have to work. This rule is best known thanks to a study at Trinity College. This article tells more about what the 4% rule entails and how realistic it is.

The 4% rule works as follows: when 4% of the invested capital of an investor is enough to live on for a year, this investor is financially independent according to the 4% rule. It is important to note that this only applies to the invested capital. Money in the savings account or in the piggy bank is not relevant because this yields insufficient return. In addition, alternative investments are not taken into account.

As this is all very theoretical, the following example shows how the 4% rule would work in practice: Johan has a stock portfolio of 1,000,000 euros. If we take 4% of this, we end up with EUR 40,000. If Johan’s annual expenses were less than or equal to EUR 40,000, he would be financially independent according to the 4% rule.

It is no coincidence that this percentage is used. This percentage is based on historical data of both the stock and the bond market. The S&P 500 has been used as an indicator for the return of equities. 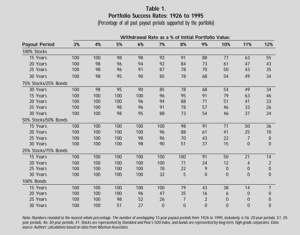 The table above, from a study at Trinity College, shows the success rate per type of portfolio and the corresponding withdrawal rate. It is based on historical data from 1926 to 1995 [1].

As can be seen in the table, the success rate of a 4% withdrawal rate is 100 almost everywhere, in contrast to a withdrawal rate of at least 5%. A success rate of 100 means that, if an investor withdraws 4% of his or her invested capital from the market each year, the investor can retire completely. However, this is based on historical data. Since the stock market has been rising relatively fast in recent decades, culminating in a return of over 28% in 2021, there are more and more rumours that the percentage should rise towards 5% or even 6%. However, this seems a big risk when you look at the success rate. At a percentage higher than 4%, you run more risk as an investor, even with a portfolio consisting entirely of bonds.

Disadvantages of the 4% rule

Although the 4% rule looks reliable at first sight, there are a number of disadvantages to the rule. Firstly, past performance is of course never a guarantee for the future. Although the American S&P500 has, on average, achieved a return of more than 10% per year since 1957, the question remains how this trend will develop in the future. If we look at the price in 2022, for example, we see that the S&P500 has fallen by 20%. Furthermore, it is often forgotten that investors also have emotions. For example, investors often react emotionally to a fall in the price, which can lead to hasty decisions such as selling a certain position unnecessarily. This may subsequently result in a disappointing return, as a result of which the rule would no longer hold.

In addition, factors such as taxes and inflation are not taken into account in this rule, of which inflation in particular can become a problem in the long run. This year, inflation in the United States is over 8% and in the Netherlands it is as high as 11%. If this trend continues, the 4% rule will not hold for long.

Do all these disadvantages mean that the 4% rule can be thrown out? Not at all. Although the rule has quite a few limitations, it is a good indicator of how much money you need when you are calculating how big your capital needs to be in order to retire. However, be aware that even this rule is not watertight and that unexpected events can always occur. To what extent the rule stands the test of time. 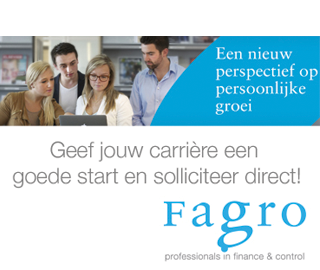 In May, Elon Musk let it be known that Tesla would no longer accept bitcoins. His decision is based on the carbon price tag. Curious? Read it here!