In 2013, Bert Groenewegen was named CFO of the year as a result of his significant contribution to the IPO of Ziggo. At that time, managing an IPO company was not unknown territory for Groenewegen. At the moment, Groenewegen holds the position of CFO at the Dutch Railway Company (NS). In this interview he discusses his career, what is involved in an IPO and the impact of COVID-19 on the business operations of NS.

Could you tell us more about your career?

In 1982 I started studying at the current Tilburg University. The first year consisted of obtaining your propaedeutic year. I chose the field of General Economics. At that time, the function of the propaedeutic year was to orientate. After completing your propaedeutic year, you took your doctoral degree, with a nominal of four years. My doctoral degree was in the field of Business Economics. During my study, I did an internship at ABN AMRO in America for one year (New York and Chicago), which was a very valuable experience. Eventually, I graduated with a master’s degree in Administrative Information Science. Over the course of my career, I ended up working for Exact Software (sales and development), Sokkia Europe (various positions), Exact Software (CFO), General Atlantic Partners (various positions), PCM Uitgevers (CFO/CEO), Ziggo (CFO), and at the moment I am CFO of the Dutch Railway Company (NS).

During your time as CFO of Exact Software and Ziggo, both companies were publicly offered on the stock exchange. Can you tell us what’s involved with an IPO?

During the preparations, you have to make sure the company is ready for it. This means that the entire administrative organization, processes and IT environment, which lead to timely and reliable reporting, must be 100% correct. In addition, it is important that every department is used to planning, forecasting and reporting internally. The numbers must be sound, both quantitatively and qualitatively.

As the IPO gets closer, it is important that a clear plan is ready. This plan must be executed and realized with the entire team. I believe it is crucial to create discipline within a company to ensure that what you promise is realized. As a listed company it is therefore mandatory to have a Supervisory Board, which supervises the Board of Directors in the interest of the various stakeholders.

Finally, you have to make sure that the allocation of all responsibilities is clear to everyone, since good preparation is essential. That is why I, together with my team, ensure that one year before the IPO all preparations are completed and we can get used to the changed environment. At the end, you never do an IPO on your own, but as one solid team.

Can you describe your tasks as CFO of the NS?

First of all, my portfolio exceeds just the tasks as CFO. I am also responsible for foreign activities (England and Germany), IT, new equipment and so on. In a nutshell, I have a fairly broad portfolio. The NS has a collegial executive model, which means that you’re jointly responsible. The most important thing when using such an executive model is to coordinate a lot of things properly with each other. Only then can you fulfill common responsibilities. Furthermore, NS is a subsidiary of the Dutch State, which means that it has an important function in our country with a broad field of stakeholders. Some of these stakeholders are: politicians, parliament, the client (Ministry of Infrastructure and Public Works), municipalities, provinces, the media and, of course, especially the customer.

“To quantify this decline: in March, after the press conference of Rutte, the number of passengers fell from 100% to 10%.”

What is the NS’ short-term view of COVID-19?

Before the outbreak of COVID-19, the short-term view was to facilitate the growth we predicted. Due to the hectic nature of recent months, we foresee a trend reversal in the coming years. Due to the government’s advice to travel only when necessary, there has been a huge decline in the number of travellers. To quantify this decline: in March, after the press conference of Rutte, the number of passengers fell from 100% to 10%. At the moment, the number of passengers is increasing again. In addition to COVID-19, there are other related causes that result in fewer passengers, including the shrinking economy, the “new” working from home and alternative transport such as e-bikes.

In the next few years we will, therefore, have to take into account fewer travellers and make savings of EUR 1.4 billion. In addition, 2,300 jobs will be lost. We mainly want to facilitate this adjustment naturally. For example, we have many older workers who will be retiring in the coming years. In addition, the organisation will be restructured, with the aim of ensuring that the train ticket remains affordable. This in order to ensure that passengers do not suffer from the lowing forecast.

What is the NS’ long-term view?

As far as the long term is concerned, NS’s view remains the same, which means that passenger transport will be made as barrier-free as possible. This means that investments must be made in the provision of information, so that passengers will not be hindered by routes that do not connect with each other or routes that are cancelled. The provision of connecting transport from station to destination or home is part of this. Thus, there must be a clear platform for cooperation with other carriers, so that it always remains clear to the traveller how the journey can be continued. To achieve this, the NS already offers trains and bicycles. Besides that, we are also looking at other possible ways of transport to make the entire journey as comfortable as possible.

Does the NS have any competitors?

NS is responsible for 80-85% of the Dutch railways. If you look at the Dutch provinces Limburg, Overijssel and Groningen, you can also see other train carriers such as Arriva, Keolis and Qbuzz. These carriers are mainly active on the regional routes, where you have less interference with the main traffic on the main rail network. On these regional routes, coordination with other local transport in the region is also very important. In the Netherlands, therefore, we face no competition on the railways, but competition in certain areas for which concessions are issued. After a certain period of time, you are allowed to make a bid for routes. The best bid may provide rail transport on that route for ten to fifteen years.

“While working you’ll become wiser. You will bump your nose, make mistakes and above all gain experience.”

What is the most important thing you learned while studying and working?

During your studies you will get a basis, you will be challenged to think and to solve problems. In addition, during your studies you will have to make social contacts, and you will be exposed to many factors, which you should make use of as much as possible.
By working you’ll become wiser. You will bump your nose, make mistakes and above all gain experience. In addition, sometimes you have to make considerations between choices. This can sometimes turn out wrong, but try to learn from it.

Do you have any golden advice for students?

There will be moments in your life when choices have to be made. When such choices need to be made, act quickly. Otherwise they will be filled in by other people. A quick decision is often better than waiting a long time and not deciding in the end. So if you like a dynamic environment, it’s good to make fairly quick decisions. As long as you make adjustments when you notice that it wasn’t the right decision after all. Take the opportunities that arise, because you will learn from them. In addition, choose an environment where you will be exposed to various factors. Do not always choose the safe route, in order to speed up your development process. 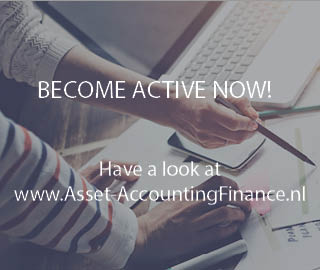