In recent years our economy has been thriving. European stock markets are unusually bullish, unemployment rates are low and GDP’s are constantly growing[i]. During recessions, the causes of the economic downturn are the issue of the day, whilst in times of abundance we seem a lot more stoic. I imagine this is because there is generally not a specific event or reason we can point out to explain the rally, and the rally has a less abrupt effect on our lives. In the next paragraphs, I will break down some of the events that caused our current rally, specifically the actions of the European Central Bank (ECB) from the 2008 crisis until now.

As you are probably aware, there is a general economic cycle that tends to take about 7 to 11 years to fulfil itself. Our last major economic downturn was in 2008. After that follows damage control, recovery and then expansion. This repeating cycle is therefore one of the reasons for our current wealth. European economy has quite cleanly followed this pattern, and now seems to be at the top again, perhaps waiting for a new correction. In modern times, we have a more regulated economy with central banks that try to smooth out the economic cycle, to get a more predictable and less turbulent growth. In response to the 2008 crisis, the ECB lowered its key interest rate to stimulate investments and relieve some pressure for banks. This worked out and after some time, economic recovery started to set in.[ii] 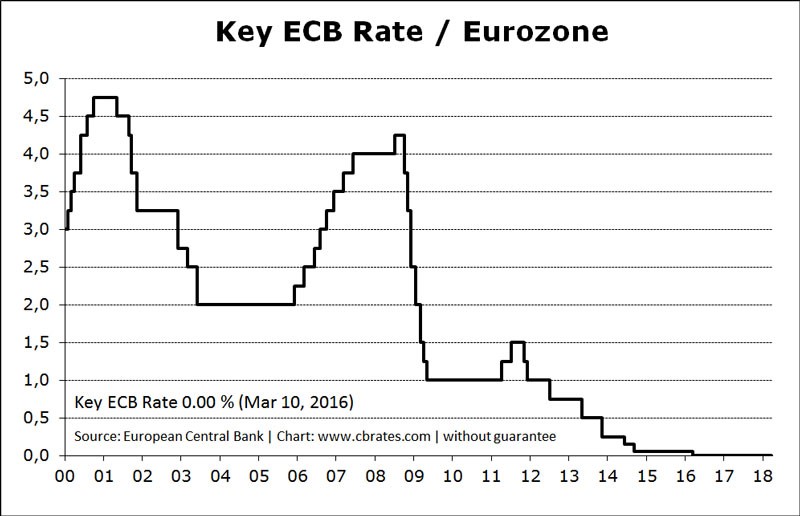 After a period of damage control, where numerous banks were bailed out by their governments, a new threat arose for the European economy. It turned out that some countries were not as financially sound as they made themselves appear, and the 2008 crisis was a shock they could not take on their own. Greece, and to lesser extent Ireland, Spain, Italy and Portugal were stuck in a spiral of expanding debts they had no money to pay off, causing their credit ratings to drop and the loans to get even more expensive. Due to a singular monetary unity of Europe, they had no way to get out of these problems without a bailout or a bankruptcy[iii]. To maintain a strong and undivided appearance, Europe had to intervene and they financed the debts whilst restricting these countries in their national financial policy in an attempt to stop further gross mismanagement of national budgets. Europe’s hand was forced to some extent, either losing face as a strong unity by cutting loose the weakest link(s), or biting the bullet. They chose the lesser of two evils and additionally kept a low interest rate so that the countries lacking behind could catch up as well.

A couple of years later, another problem started to arise. Inflation rates were dropping and there is a constant fear of deflation as our monetary system is based on inflation. Allow me to elaborate on this as briefly and clearly as possible.

We have a limited total money supply. This money is mostly managed by banks, who multiply it and distribute it.

Money is created when a new debt is taken on, either at a commercial bank or at a central bank.

Money is destroyed when this debt is paid off or when bad debt is depreciated.

Money has a time-value. Having a debt costs you money over time, and in essence all existing money is a debt. This means there is a constant outflow of money due to interest payments.

When inflation staggers, there is no need for extra money in the system and the risk arises that the system implodes.

“The news is about terrorists and celebrities and we are looking at our future holiday destinations. Nothing to worry about, right?”

As a solution to boost inflation rates, the ECB set up a ‘quantitative easing (QE)’ programme, starting March 2015. This programme involves buying assets from commercial banks to create more money in the banking system that will set in motion a cause-effect chain[v], benefiting everybody. As a double-edged sword the ECB started buying mainly risky high-yield bonds from banks, taking out a few domino-pieces in case of a new economic downturn. The QE started to take effect, and banks were able to sell off risky bonds, reducing their risk profile. Now, we are at the current situation. We are wealthy, the rich get richer and everybody has a job. The interest rates are low, so there is a great economic climate for growth. The news is about terrorists and celebrities and we are looking at our future holiday destinations. Nothing to worry about, right?

You may have noticed a slightly sarcastic undertone in pieces about the seemingly wonderful interventions of the ECB. Before I elaborate on that, I will show you a few graphs. The first one quite theatrically demonstrates that European High Yield bonds yield less than US 10 year Treasury bills. 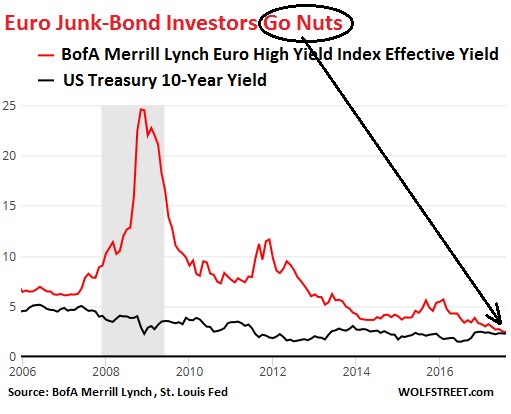 At this moment, the riskiest European corporate bonds are deemed a safer investment than the US 10 year Treasury bill. Part of this is the QE programme pushing prices of high-yield bonds down by providing demand, but European high yield bonds that are not eligible for getting bought by the ECB have the same yields. This basically implies that the high yield bonds hold no risk, because the ECB has your back on this one, besides having such cheap interest rates in Europe, a bankruptcy is very unlikely, as companies can refinance forever. Even the least-functioning companies that would normally be overtaken by more efficient versions are succeeding in the current economic climate.

Now take a look at this histogram. 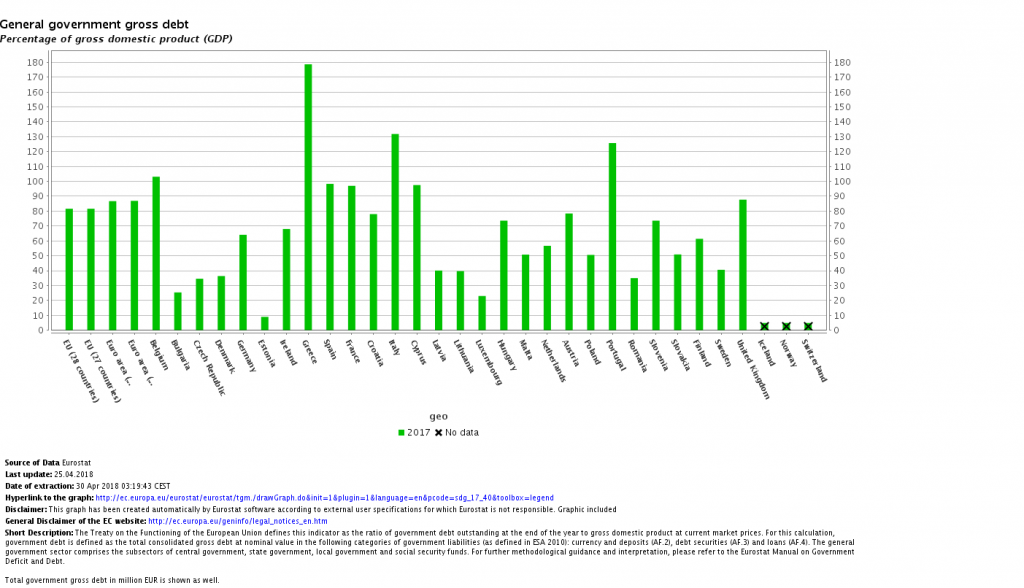 It shows countries’ debt in percentage of their GDP. The average across the EU is 81.6% in 2017. In 2008 it was 60.8%. This means that the moment interest rates rise, all these countries have a huge increase in interest costs, and also have less wiggle-room to manoeuvre because their debt is already so high. And this can be a major issue. If the next crisis hits, increased government spending is an important tool to fight it, but this will be impossible to finance. The debts should come down when times are better, and governments are able to raise more taxes without having to borrow extra money, but this doesn’t happen because politically, the parties that want to raise taxes and decrease government spending never win elections.

The stock markets have been a very thankful beneficiary of the actions of the ECB in the past years. With so much money distributed across banks, stocks found their way up. Bad companies no longer exist, because everybody can make money in the current market. And if they can’t? They just keep financing at the extremely cheap bond market. Companies can finance any project they want, because investors have excess money that they want to have invested. It is currently broadly accepted that stocks are overvalued. If interest rates go up, bad companies will have to refinance and it will cause a wave of bankruptcies. So what is my concrete problem with the ECB policy then? Their mission is to smoothen out the economic cycle and maintain price stability. What they are doing lately is acting as a failsafe for countries and large banks that got into trouble by mismanagement and fraudulent behaviour, not by the economic bottom hitting them hard. This is creating all the wrong incentives for management across Europe. Our current stock market is vastly overvalued because of QE and the low interest rate. Yes, we are all somehow getting an advantage out of this, but what will happen when the next crisis strikes? And believe me, it will.

“The ECB has failed to increase interest rates when things were better, so now they are stuck with no room to lower it further. We will have to take this crisis to the chin.”

A negative shock on a fair-value market can do some damage, but on an overvalued market it will be a one-hit KO. But we can still handle this right? We have had some crisis before and we came out fine in the end! I agree, but during those times, the interest rates were lowered to soften the blow. The ECB has failed to increase interest rates when things were better, so now they are stuck with no room to lower it further. We will have to take this crisis to the chin.

Another issue here is the debt problem that exists in many countries. If the interest rates can’t go any lower, and there is also not much room to devaluate the Euro due to divided intra-European interests, this will cause problems larger than ever before. The ECB forced countries to clean up their debt sheet and make more strict budgetary decisions. Even though this was agreed upon, in many cases reality turned out differently and the debt levels kept increasing. Everything that could go wrong in the banking system was filtered out by the QE programme. All the risky assets that were ready to bust were bought away from the banks by the ECB and caused a feeling of inviolability within the stock markets. However, at this point not much is needed to trigger a big correction on the stock markets. Volatility has been very low for many years, but the short but powerful drop in January shows how afraid investors are that it all goes bust. Economic cycle indicators of the Dutch Central Bureau for Statistics show that we are at the end of the fat years.[vii]

Now let me finish this rant with a blunt and distasteful metaphor. After the 2008 crisis, the ECB expertly cared to the economy’s wounds by lowering the interest rates, like a doctor patching up his wounded patient. Now that the wounds are healing up, and the patient is feeling a bit better, the doctor gives medicine to prevent scars and accelerate the healing process, also teaching the patient to take the medicine with care. The ECB bails out some of its constituents and gives them some clearer rules on budgetary policy and national debt. Also, it prevents losing its international prestige by preventing any bankruptcies. The patient starts feeling better, but also starts to like the feeling the medicines give. The ECB maintains low interest rates, even though the economy is already going well. The patient starts to abuse the medicine, and the doctor keeps providing more. The ECB initiates the QE programme, to further boost the economy. The doctor is now basically a drugs dealer providing a junkie with his daily hit.[viii]

[i] In the graph below are returns of European indexes. Blue being the German DAX30, light blue the Dutch AEX and green the Spanish IBEX. They all prosper, but the Spanish index had some more trouble because their national economy struggled to recover from the 2008 crisis a bit more.

[iii] If these countries had their own monetary unit, they could simply inflate the local currency and in that way solve the debt crisis they were in.

[v] https://www.ecb.europa.eu/explainers/show-me/html/app_infographic.en.html Visit this site for a cool infographic on the cause-effect chain.

[vi] https://www.zerohedge.com/news/2017-08-10/italian-junk-bonds-yield-less-treasurys-insanity-bond-market-4-charts A good read, and the source of the picture.

[viii] Note that anything in this article is the opinion of the Author and the Author only. 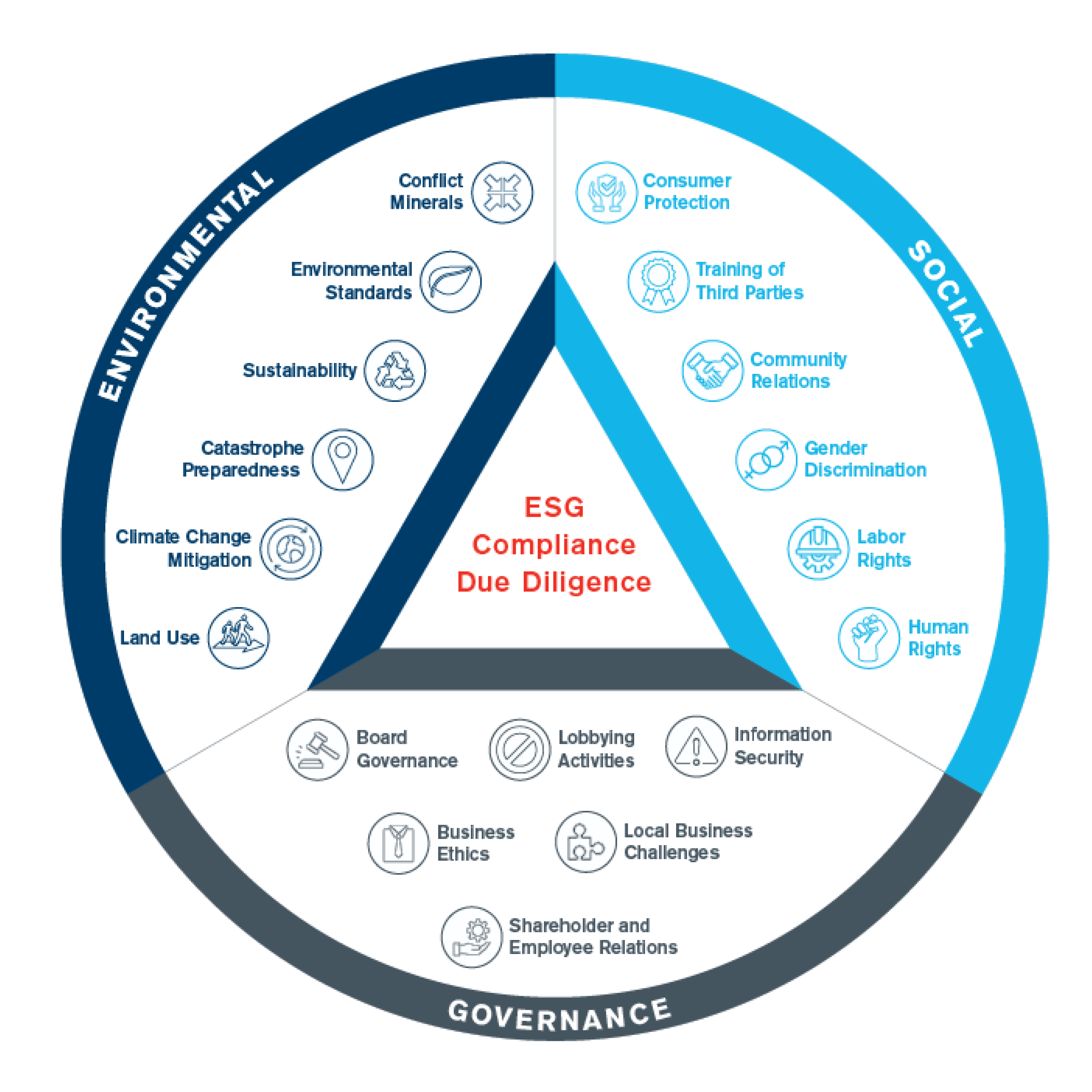 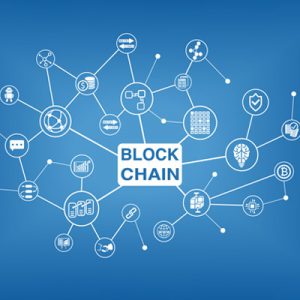