After a good preparation, a large promotion campaign and a lot of worrying about Corona, the 22nd of February was finally here: the kick-off of a physical Accounting Expedition!

At 7.45 a.m., 23 motivated, and still a bit sleepy, students gathered at Tilburg Central Station to leave for Eindhoven. After a few quick coffees and sandwiches, we were off to our first company. After a smooth journey to Eindhoven Airport, we arrived on time at the kick-off of the expedition: Deloitte. With a warm greeting we were welcomed, and after some cups of coffee and glasses of orange juice, it could really start. First we got a short introduction about Deloitte itself, what they stand for and how the company distinguishes itself from the other offices. Then we could get to work in groups on the case they had developed for us. The case was about internal control and risks; we were allowed to look for potential problems within the operational management of an electric scooter supplier. Part of the process was to interview the sales manager of the company (or, a well-prepared Deloitte accountant), from whom we had to get as much information as possible about the internal operations of the company of the case. Afterwards, the groups presented their findings to the employees, who were impressed by this group of aspiring accountants. To conclude, we had a nice lunch at the office with tasty healthy, and okay, somewhat less healthy sandwiches. The first company visit was a great success, and everyone was eager to see what the next company had in store for us.

After dropping off our luggage at our hotel in the centre of Eindhoven, we could immediately continue to the second company of the day: KPMG. Here the programme opened from the ninth floor of their office, with a fantastic view of Eindhoven. After a fun and personal introduction by the KPMG staff, we worked in groups on an audit fee proposal presentation for the Netherlands’ hippest foodtruck company: ToetToet FoodFood BV. During the presentation we had to give well-founded reasons for increasing or decreasing the audit fee for the coming year. The presentations were given with the necessary creativity, which made it a very fun and certainly educational challenge. Of course, the attentive KPMG accountants and some of the keen students also asked some difficult questions. Together with KPMG, we ended the day with an excellent dinner at restaurant Plein 4. With the necessary bottles of wine, it was an exceptionally pleasant end to an intensive and fantastic first day. Afterwards, part of the group went for a drink at the Vooruitgang, while the rest went back to the hotel. After all, after a successful first day, there was still another day to come.

“Although a shopping spree appealed to a number of students, we decided to head for the office anyway”

The next morning, the first alarm clocks went off at 7.30 a.m., the sleep was washed away and the suits were taken out of the closet again. A hearty breakfast was served in the hotel restaurant, so that we could start the second day of the expedition fresh and reinvigorated. The suitcases were already packed and put away, so that we could immediately proceed to the third company: PwC. The office was easy to reach thanks to its excellent location in Eindhoven, at the top floor of the Piazza shopping centre, with the Bijenkorf as neighbour. Although a shopping spree appealed to a number of students, we decided to head for the office anyway. Unfortunately, the 23 students couldn’t fit into the lift, so we got our morning workout in by climbing four floors of stairs. At PwC, we were received in true Brabant style with a nice warm sausage roll for all participants, after which we started the programme in good spirits. After a fun opening quiz, we got down to work on the case study in groups. It was an interesting case, it was about a festival and all the risks that go with it, especially the risks you have to take into account as an accountant. And of course, the goodie bag also contained a pair of bright orange festival sunglasses! With an extensive tour of the fairly new office behind us, we moved on to At the Movies for a delicious lunch with a group of PwC partners and accountants. One partner had imagined a very quiet lunch, thinking we were actually going to the movies together. After another successful morning, we went on to the last office of the expedition: EY.

At EY we were also warmly welcomed by the staff, and a few working students who looked very familiar to us. We were also well looked after here with a bowl of tasty biscuits and muffins, unfortunately most students were very full by now after the morning. After a nice introduction of the staff we were divided into two groups for the rest of the afternoon. The first group was going to do an activity that would not have been out of place in an engineering course, a game of mega jenga. With a list of requirements, we had to build one big tower in groups, after which the groups competed against each other in a game of jenga. Each brick had a number, which was linked to a quiz question about EY itself. So we had a fun and educational start to the afternoon. One particular group was significantly bad at jenga, as they managed to knock over the entire tower with every second piece they tried to pick up. The group then proceeded to take a more serious approach with a case study about an Asian restaurant chain, in which an EY employee took on the role of restaurant manager. The focus of the case was on financial fraud detection within the company. We actually got to analyse financial statements in search of misstatements and other mistakes and oddities. After a fun and substantive afternoon, we continued to our dinner location, which happened to be at the Vooruitgang. Here we enjoyed a delicious dinner, and concluded the Accounting Expedition together. After picking up our suitcases at the hotel, we took the train back to our own beds after two fantastic and intensive days.

And so the Accounting Expedition 2022 came to an end. The companies, and certainly the dedication and enthusiasm of the students, have ensured that the event was a resounding success!

Finally, I would like to thank Anouk, Lena, Elze and Lucas for their hard work in the committee. And of course an honourable mention goes to our coordinator Nina. Thanks to the dedication of everyone, we were able to put together an event that we can still look back on with pride. I can definitely say that the Accounting Expedition 2022 was a huge success! 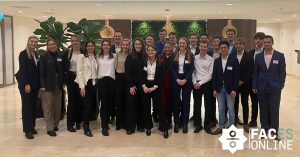