Home » Why Starbucks also acts as a bank

Why Starbucks also acts as a bank

What began in 1971 as a small coffee shop in Seattle, has grown into a global phenomenon nowadays: Starbucks. With 30,000 outlets around the world, it is impossible to imagine the world without it. In 2020, the company was ranked 37th in Forbes’ list of “most valuable brands”, valued at 18 billion dollars. Starbucks owes a large part of their success to a loyal customer base. To reward these customers, Starbucks has been using loyalty cards for years. For every nine drinks you order, you get the tenth from Starbucks. In a number of countries, this punch card has been digitised into an app. Besides making sure customers don’t lose their cards, this also ensures that Starbucks manages almost 1.6 billion dollars from customers, for which it doesn’t have to do anything in return.

Customers can put money on a digital (or physical) card. They can then use the money on the card to pay at Starbucks. So the app works like a bank account: Starbucks can invest the money between the period when customers deposit the money and withdraw it (When they are buying coffee). Therefore, Starbucks can thus make a profit with the money within this period. The most recent annual report shows that customers have deposited a total of 1.59 billion dollars in these Starbucks accounts. Because customers receive no interest, they provide the company with free money.Actually, this is not unusual. The interest rate on a Dutch bank account has been 0% for some time now. The difference is in the reserves that banks have to keep and Starbucks does not. Financial institutions are subject to strict regulation and must adhere to rules when investing customer money. A good comparison is PayPal, which also manages money from customers until they decide to use this money in online transactions. They are obliged to keep a large part of this money in cash or to invest it in safe government bonds. This is only logical, because PayPal has to keep enough on hand for when customers withdraw their money. This is not relevant for Starbucks, as they do not pay out their customers in cash, but in coffee. This allows Starbucks to invest customer money in high return projects or use it to expand the business. The Starbucks account is an attractive way to raise capital, as Starbucks normally pays between 0.46% and 4.5% on their own bonds.

“This is irrelevant to Starbucks as they do not pay out their customers in cash, but in coffee”

There is also the concept of “breakage”. These are amounts that customers have in their Starbucks accounts but have forgotten about and Starbucks estimates that they will not use. This amount is added to profits. In 2021, this amounted to $164.5 million, about 10% of the total amount deposited by customers at Starbucks.

Currently, you can use the card in the United States and Canada, just two of the countries in which Starbucks operates. In the US, the app accounts for 40% of sales and in 2019 Starbucks has indicated that it wants to make the digital savings card more attractive. Understandable, because the growth potential is enormous. By expanding the savings programme to multiple countries and making it even more attractive for customers to put money on the card, the profit from breakage can become much greater. Good news for Starbucks, but also for the regular visitor. The free drinks, cakes or merchandise that customers receive after a number of transactions are a kind of interest on their credit. Compared to the interest on savings at a regular bank, that’s not crazy at all. 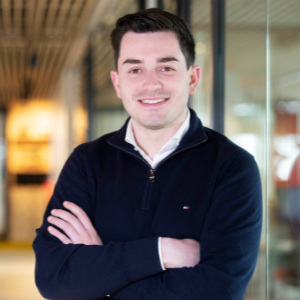 Curious as to what it’s like working at Joanknecht? In this article Niels will tell you about his experiences from the past few months. Read it here.

What would it profit you if you had borrowed the maximum at the beginning of your studies and invested half of it in investments? Willem shows you in this article!