Bitcoin: a new hedge against inflation

Bitcoin has gained momentum the last few years due to its increased adoption and understanding of the technology by the public. In the year 2021, much has happened: Bitcoin reached a new all-time high of approximately $69.000, financial institutions and billionaires started accumulating more Bitcoin, the first Bitcoin ETF launched, Coinbase had its IPO, and the first country (El Salvador) made Bitcoin its legal tender. There are a wide range of topics to talk about when it comes to Bitcoin and cryptocurrency in general, but this article focuses on how Bitcoin hedges against the everlasting inflation of fiat currencies and what gives Bitcoin its value.

Excessive money printing by the Federal Reserve and European Central Bank has caused the purchasing power of the U.S. dollar and Euro to decline significantly, as shown below. 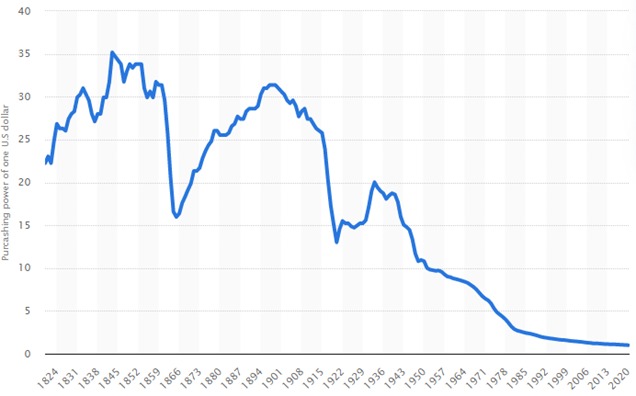 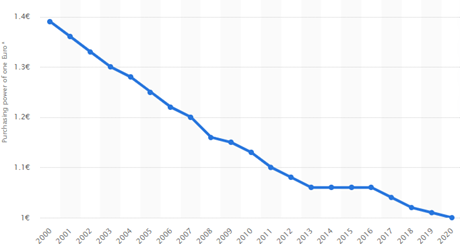 This centralized system of printing fiat currency at will has caused inflation to continuously rise over time. The US inflation rate rose 6.8% [5] in 2021 which is the highest since 1982 and Eurozone inflation rose to a record 4.9% [6]. This inflation has not only caused a decrease in purchasing power but it has also significantly widened the wealth inequality gap. The central banks injected billions of dollars into the economies worldwide where the majority of the stimulus was invested into the financial markets, making the upper class only wealthier. The middle class also benefited from this but not on the same level as the upper class, as they still need to allocate a bigger portion of their cash into savings and expenditures. However, the lower class did not get the chance to profit from these investments , since they needed the cash for survival and were not able to invest a portion of their income in  financial markets. Therefore, the upper and middle class have their wealth protected from inflation but the lower class had their purchasing power eroded. 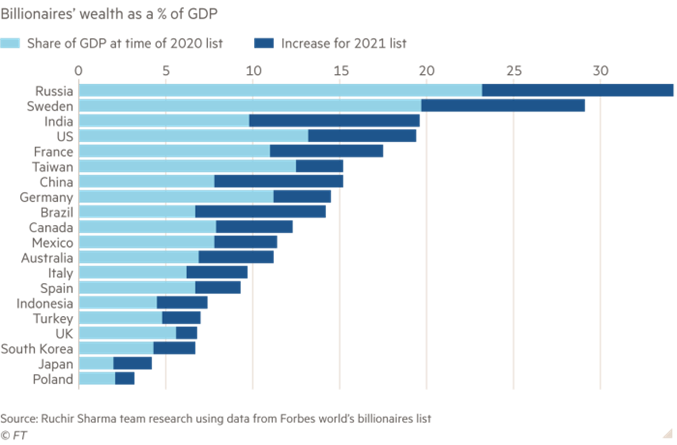 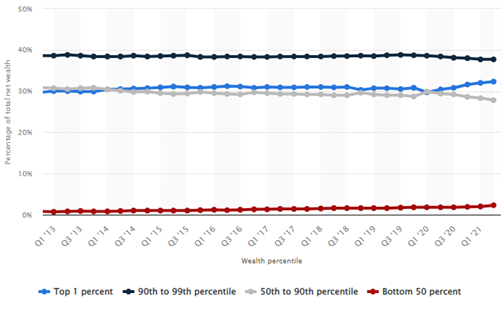 Figure 6 – Distribution of net wealth in the United States [8]

How can we oppose this centralized system of inflationary fiat currencies which causes your purchasing power to decrease and a wider gap in wealth inequality? This is where Bitcoin comes in.

Bitcoin is a digital currency launched in 2009 by the anonymous Satoshi Nakamoto with the goal of creating a new electronic cash system that is fully decentralized without the need for a central authority. [11]

A Bitcoin transaction can be done by transferring Bitcoin from one public address to another. Bitcoin records its transactions in chronological order on the blockchain which is a digital ledger distributed across a peer-to-peer network of computers called nodes. All the nodes have the same complete copy of the blockchain and have been adding mined blocks since the beginning.

“This process is called Bitcoin mining and uses the proof-of-work consensus mechanism, where miners try to find a unique 64-digit hexadecimal number called a hash by using trial and error.”

Each block on the blockchain contains the latest transactions which are grouped together, validated, and then added to the blockchain. This process is called Bitcoin mining and uses the proof-of-work consensus mechanism, where miners try to find a unique 64-digit hexadecimal number called a hash by using trial and error. The first miner to guess the hash number correctly has permission to mine the next block. They will then receive the block reward, which is the block subsidy (currently 6.25 BTC) and network fees. The block subsidy is the new Bitcoin created into circulation and is an incentive for miners to continue securing and maintaining the Bitcoin network.

How do we know this algorithm is true? It is hardcoded in the public Bitcoin source code as shown below. 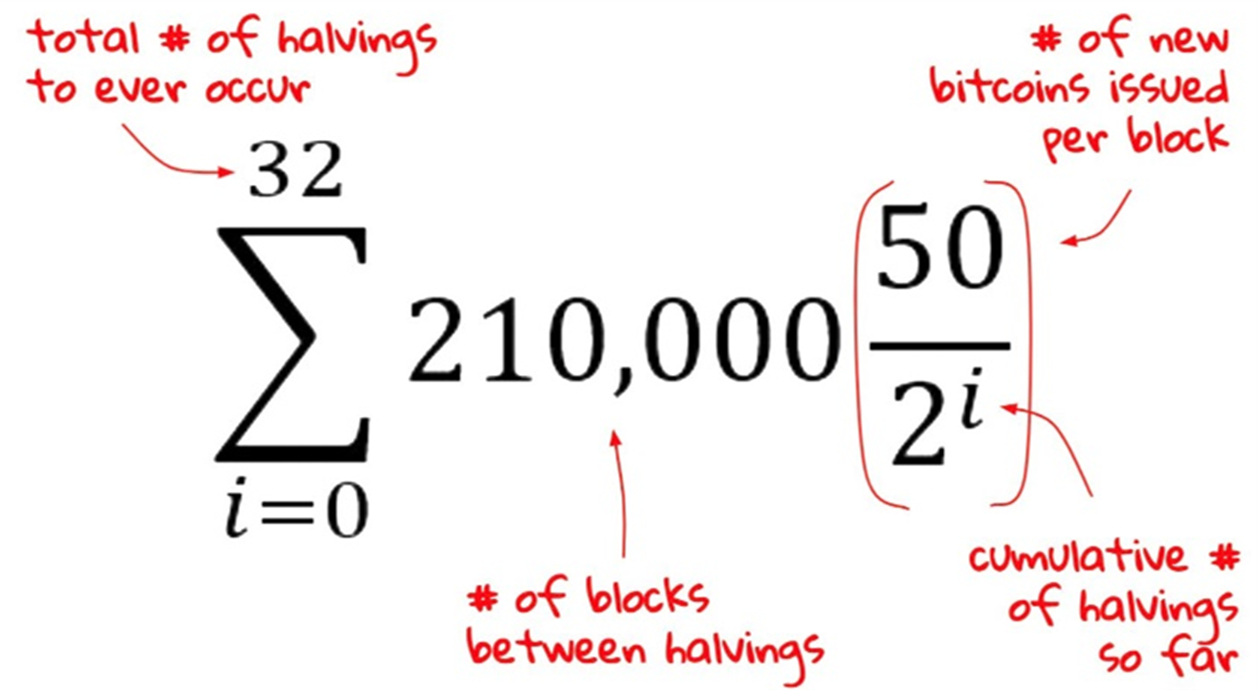 Using the equation, we can calculate how many Bitcoins will be created into circulation between each halving and what the corresponding block subsidy is. 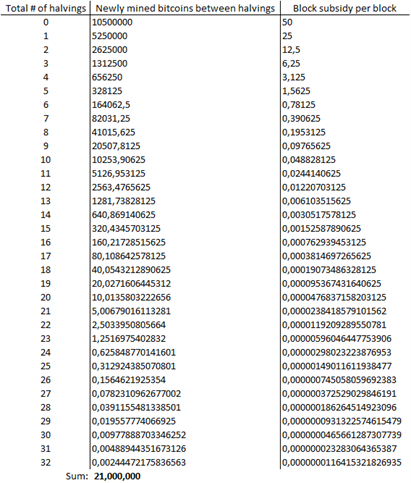 Figure 11 – New Bitcoin created into circulation and block subsidy between each halving. 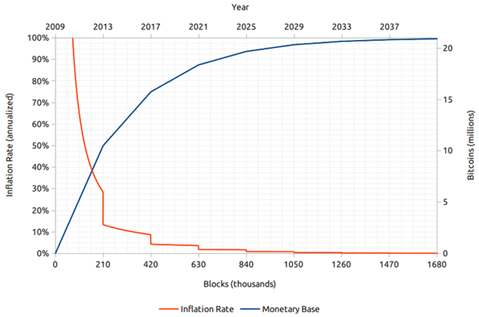 The block subsidy halving is equal to Bitcoin’s inflation rate halving, which makes it more scarce to own Bitcoin over time. When the last Bitcoin is mined, the amount in circulation will reach its maximum supply at 21,000,000 and then Bitcoin becomes fully deflationary. Bitcoin currently has halved three times and is now at an annual inflation rate fixed at 1.8% which is already below the central bank’s ‘target’ of 2%.

Bitcoin’s tokenomics and deflationary monetary policy are what drives Bitcoin’s price up which makes it a great hedge against the inflation of fiat currencies. The proof is in the chart below which shows the entire price history of Bitcoin and the surging price action that followed after each halving so far.

It is not only Bitcoin’s deflationary monetary policy which increases its value, but also its characteristics and its traits as money. 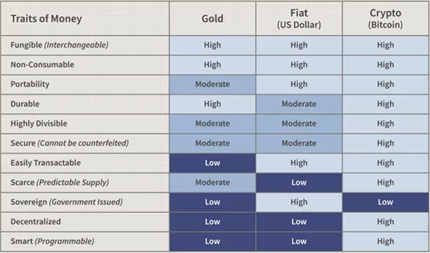 The Bitcoin network runs 24/7/365 and anyone around the world is able to transact with Bitcoin. It can be stored in your own digital wallet where you are in full control of the amount of the Bitcoin you want to send to another wallet address. You can access your Bitcoin wallet anywhere with an internet connection and as long as you have your unique chronological 12 or 24 word seed phrase. Bitcoin’s cryptography ensures that all the transactions and the users remain secure and in a decentralized manner hence why Bitcoin is called a cryptocurrency. Recordkeeping is done automatically by the nodes who all have the same copy of the blockchain and will continue to add mined blocks full of verified transactions. The Bitcoin blockchain is also transparent as all the transactions are public, permanent, and traceable which anyone can view. It is also pseudo-anonymous because each user has a public address, but their identity is unknown.

Counterfeiting Bitcoin is almost impossible because it would require what is called the 51% attack. This is possible if the attacker tries to double-spend their Bitcoin where another miner will verify the second transaction before the first one. This would create two copies of the blockchain where both transactions are successful. A solution to this problem is that miners record both copies of the blockchain but continue to work on the one that is longer. As one blockchain becomes longer, miners will keep working on it until other miners stop working on the other shorter copy of the blockchain. If the attacker is able to control more than 50% of the mining power then they are able to make the shorter counterfeit blockchain the main one and other miners will follow.

https://www.blockchain.com/explorer allows you to view the entire Bitcoin blockchain in great detail.

Bitcoin is the new store of value which can also act as a secure medium of exchange. Bitcoin’s deflationary monetary policy is perfectly set up to hedge against inflation and has already proven itself in Figure 13 with its significant returns after each halving event and in Figure 16 with the Consumer Price Index (CPI) in Bitcoin terms. 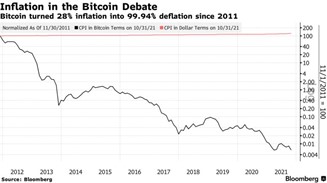 In 2021, Bitcoin returned 59,4% whereas Gold had a disappointing -3,7% return despite record inflation numbers. Bitcoin also outperformed all the capital and debt markets as shown below. 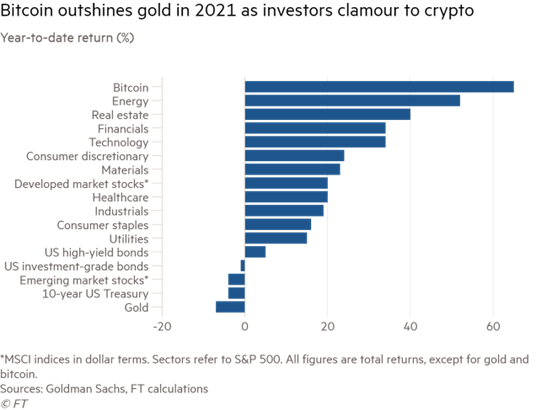 Bitcoin receives criticism for its scalability issues but this is solved with the Bitcoin Lightning Network, which is a layer two  solution that allows for instant payments which are almost feeless. Another issue is the amount of electricity Bitcoin mining uses which is addressed in another article on our website: https://faces-online.nl/en/bitcoins-carbon-price-tag/.

The self-sovereignty aspect and decentralized structure is what makes Bitcoin one of the greatest inventions in both the financial and technology sectors. People have full control of the holdings and can transact at any time without the permission of a central authority or third party: the power is finally shifted to the general public. The Bitcoin protocol is created with advanced cryptographic security which is able to create trust in a trustless system.

If you think it’s too late to buy Bitcoin, just remember: Bitcoin has only halved 3 times out of 32, reached an all-time high of $69,000 at a market cap of around $1,3 trillion, and investment banking giant Goldman Sachs claimed Bitcoin can overtake Gold’s market share which currently has a market cap of $11,5 trillion [18]. We are still very early. 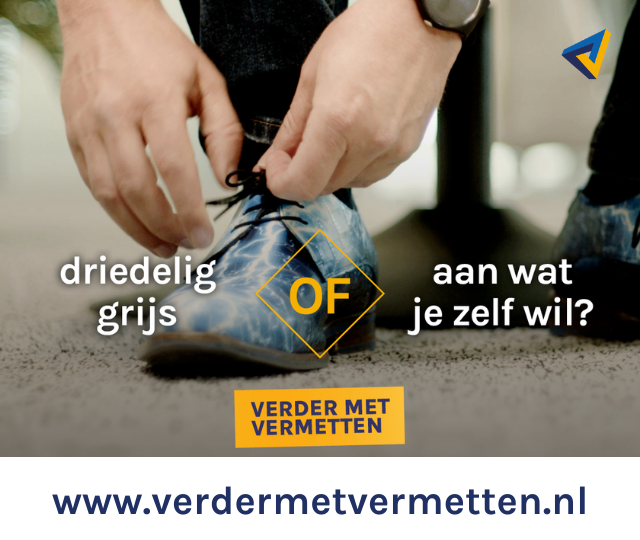 One of the treasures of A&F Investments

Curious about Aphria stock and why A&F Investments decided to invest in it? This article discusses it, so read it now!