Interview with Sytze van Odijk – Graduated as a medical doctor from Groningen University in 2015. Bachelor of Science from University College Roosevelt in 2011 with courses in medicine, computer science, mathematics and economics. Working with blockchain since 2015.

Blockchain technology is mostly renowned through its application bitcoin. As bitcoin became a trending topic in the media due to its high volatility, people became familiar with blockchain technology as well. However, the distinction between Bitcoin and blockchain technology is often misunderstood. What is blockchain technology and how is it different from Bitcoin?
The blockchain-gospel starts with the birth of the internet. Because of the internet it became very easy to spread digital data without any effort with everyone who has a connection. It was the start of the democracy of information: on the internet everyone can add, multiply and change data.
The current internet however is not made for transferring digital property. If I send you an MP3 – you and I immediately have that file on our computer. Which is fine for music, but with a digital 5 euro bill, it immediately causes problems. It’s very crucial that if I send you the money, I don’t own it anymore.
This problem is what’s known as the “double spending problem”. The Bitcoin developers solved this problem by 1) giving everyone a copy of the register containing all bitcoins and 2) rewarding those who put an effort in keeping the “right” copy of that register.
In that case there isn’t a sneaky way of spending the same coin twice, because if you get caught, literally everyone is watching your transaction. Where bitcoin is fulfilling this role of digitally saving and handing over monetary value, most of the times anonymously, developers are focused on creating many different applications.
For example, digitalising property papers of a container of a freight ship, or safely storing and sharing your online identity. Bitcoin is being used now to transfer money, and was the first functional blockchain. Nowadays there are other blockchains using a similar technique, where more features might be possible than just transferring money to each other.

It is often suggested that blockchain technology will change the business landscape dramatically. What are its opportunities and what do you think the future of blockchain technology will look like?
As humans we are prepared to pay a lot of money for a guarantee of whatever that is real, true and has an absolute outcome. Thanks to the hard work of the banks and legislation on the forgery of money, we can trust on it that nobody in the Netherlands is pressing their own money and that there are no (digital) fake coins in circulation.
The bank makes it possible for us to develop our activities, but we depend on the bank as an institution to ensure our payments. This position as a trusted third party gives the bank their existence and we pay a literal price for that. Blockchain technology has what it takes to reverse the necessity of guarding the authenticity of money for example.
We don’t need to depend any longer on a bank as a central organ to guarantee the truth – the fact that you can see it in this blockchain is enough to know if something is true or not. Coins on the blockchain cannot be reprinted and forgery of money is impossible because of the encryption.
The future of blockchain technology thrives among other things on the fact that the current trusted third parties will lose their monopoly on safeguarding the truth and because of this are forced to reinvent their right to exist and their added value.

How many types of blockchains and decentralized systems are there? What are the differences?
There are three different main groups: public, consortium and private blockchains. The first group is seen as the most pure form of blockchain (like Bitcoin for example) and defines itself as: access to the blockchain is not masked, the software is open source and generally all transactions are public.
Public blockchains also have their own cryptocurrency in order to guarantee the stability and function of the platform. The most well known examples of public platforms are Bitcoin and Ethereum. On a website like coinmarketcap.com you can see an overview of all platforms and/or cryptocurrencies – currently (August 2018) there are about 850 of them.
Consortium and private blockchains have a more closed character and don’t always have a cryptocurrency at the foundation of their platform.

School of Blockchain
School of Blockchain quickly identified the opportunities of blockchain technology and you have decided to make a business out of it. What are School of Blockchain’s core activities?
School of Blockchain has the purpose to make new technology understandable and available. Currently we do this through exploratory projects for companies with blockchain decision models. We offer a Blockchain Business Scan.
In this scan we review the entire process, including systems and actors, to explore if the main inefficiencies could make a viable use case for a blockchain solution. We can then create a working demo in no time. We also explain to our clients that it’s not always beneficial to invest in blockchain solution.
One of my favorite examples is a project we’re doing with a large supplier of fruit and vegetables. There are several manual steps in the delivery process that cause errors in administration, in turn resulting in delays in the order handling, wrong deliveries and late payments. It’s a classic supply chain management case, where blockchain as a digital transformation can offer a lot of benefits.

“For the accountant this means that their role will become more data-driven and consultative of nature.”

It is generally known that automatisation within the field of accountancy is upcoming. Assume that an accountancy firm considers to implement blockchain technology. What would be your advice?
We believe the idea that new technologies always have to be disruptive is a little crazy. Instead of disrupting ecosystems and getting rid of as many players as possible, it should be about organisations fulfilling their most useful roles. Yes, you have to be prepared to make drastic changes, but it doesn’t have to be at the cost of your company culture.
We see it as our responsibility to help companies with these kind of transformations. With the use of blockchain it will for instance get easier for companies to earmark their money. In that way a part of accounting can become more automated. This is an interesting development within accountancy that should get more attention.

Do you think that blockchain technology will be an important innovation within accountancy?
Absolutely. Blockchain offers a decentralised ledger where all transactions are updated in real-time and published to a predetermined audience. Individual companies can choose to keep a part of their bookkeeping in this shared register. With the help of “smart contracts” this register can get more automatisation in accountancy.
Take for example earmarked payments that are programmed in smart contracts. In that way certain expenses can be done automatically, and only after certain conditions are met. One application could be payments for gas that are automatically expensed and paid out when using a specific gas station.

What will be the role of the accountant if blockchain technology would develop to an established technology? Do you think that accountants will disappear or that their tasks will change?
With the introduction of new methods there are always people who are worried about the future of their branch. Realistically, we see that innovations usually bring forth a change in job responsibilities rather than that a job stops existing.
For the accountant this means that their role will become more data-driven and consultative of nature. Blockchain technology will help the accountant gain access to real-time sources of truth to explain available resources and obligations of an organisation. The controlling responsibilities of the accountant may be simplified and the accountant will then gain a more strategically important position, with focus on planning and economic interpretation of the data. 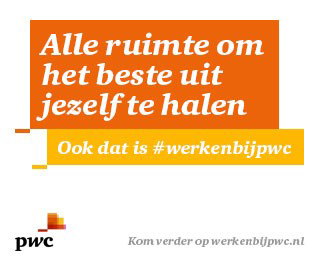 Curious about how an internship during your studies can contribute to your career? Students tell about their experiences!